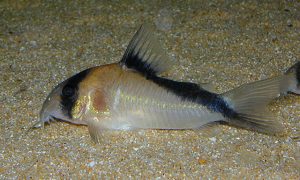 Corydoras davidsandsi is an active and interesting species of cory cat from the Rio Negro watershed. They have a bold black stripe that can be used to identify them from other similar looking species of cory, (it runs the entire length of their body continuing onto the caudal fin and it splits before the caudal fin when seen from above.) They can be encouraged to breed in an aquarium by mimicking a rain storm, i.e. doing a large water change and replacing it with slightly cooler water. They respond well to being kept in groups of at least 6 fish, and being fed a varied diet including both dried foods such as flakes and sinking pellets and live foods such as blackworms. They can be kept in tanks as small as 10 gallons, but larger groups should be kept in larger tanks. They also tend to do better in tanks with a thin layer of fine sand, as opposed to a bare bottom or gravel. They can gulp air from the surface, which allows them to live in low oxygen environments during the low water season, and will occasionally bolt to the surface for a gulp of air and back down when kept in an aquarium. They are armored and have sharp pectoral spines that really smart if they poke you- something to keep in mind when handling or transporting them in plastic bags. They are readily available from captive raised sources, but wild caught specimens from the Rio Negro have the added environmental and social benefit as we have discovered studying and fostering the Rio Negro Aquarium Fishery.

Do you know there are hundreds of species of aquarium fish wild-caught collected in the Rio Negro Fishery of Brazil?