The Rio Negro is the largest tributary of the Amazon basin in terms of annual discharge. Since the early 1950′s, extraction of tropical fishes has occurred from the Río Negro, the largest tributary of the Amazon River. The Río Negro is a blackwater river, characterized by dark, tea-colored water and high acidity. The river discharges approximately 3.69 quadrillion gallons of water each year, roughly three times that of the Mississippi River. To date, deforestation along the Río Negro has been minimal due in part to the infertile sandy soils unsuitable for agriculture. Perhaps more important, though, is the fact that the local people are largely engaged in limited subsistence activities, such as the aquarium fishes and piassava (palm fiber) trade, which generate enough cash to provide for basic necessities. Low human population densities, typical of the black water areas of Amazonia, play an important role as well. The Project Piaba study area extends from the mouth of Rio Negro (Manaus) to Tapuruquara (600 km up river), including the lower Rio Branco and Rio Demini in the municipality of Barcelos, an area approximately the size of the State of Pennsylvania. 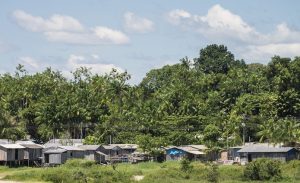 The Amazon rain forest ecosystem is one of the richest and most diverse on the planet. Some of the world’s most spectacular animals, many of which are endangered, come from the Amazon. The large cats, primates, parrots, river dolphins, and all other species we associate with the Amazon depend on the integrity of the ecosystem.

There is another species dependent on the Amazon ecology- our own. Although the people living in the rain forest know better that anyone the uniqueness and value of the Amazon, life there is difficult and people will do what they need to do to feed their families. Most of the available options for making a living have disastrous results on the ecosystem–gold mining introduces mercury to the environment and timber harvesting, cattle ranching, and agriculture dramatically reduce biodiversity and have severe impacts on aquatic ecosystems. Furthermore, these environmentally destructive practices are usually unsustainable and remove options for future ecologically sound development. 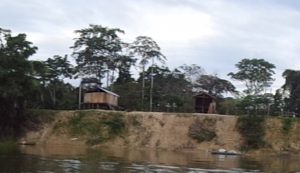 Making a Living- the Piabeiros of the Amazon

A piabeiro is the name given to the fisherfolk of the Amazon River region. The piabeiros gather aquarium fish, such as the colorful cardinal tetra, cichlid, and small catfish. Together, these fish are a part of a group called piabas, the Portuguese word for aquarium fishes. Piabeiros export these piabas all over the world for the lucrative aquarium fish trade. While exporters and wholesalers profit most from the catch, there is unequal compensation for local fishermen who use the river’s resources for the livelihoods.

The piabeiros are economically tied to the land; there are few other viable sources for income in the area. Local villages could resort to cattle ranching, mining for gold, and logging their land, activities that would be destructive to the fragile Amazonian ecosystem.

To encourage the development of a sustainable fishery and at the same time, save the forest, Project Piaba was formed in 1989. The Project Piaba team trains local community members vested in the fishery to train the fisherfolk on humane fish handling skills, providing equipment and organizing the fishermen into a “co-operative” that gives them a voice. The co-operative, called ORNAPESCA lends them much-needed negotiating power, and helps them lobby for equitable prices in return for their catch.

To assist in their mission, Project Piaba recruits biologists, veterinarians and many other professionals to travel on expeditions along the Rio Negro. This research is essential for ensuring that the aquarium fishery in place does not disturb the delicate balance of the rain forest and river ecosystems. By strengthening the wild-caught fishing along the Río Negro, Project Piaba is helping to preserve rain forest ecosystems, like that of the Amazon, and creating a sustainable balance between the piabeiros and the land for years to come.

The Fishing Industry in Amazonia

Barcelos, Brazil is the aquarium fish trading center of the mid and upper Río Negro basin. Of the 5,000 freshwater fish species that live in South America, some 3,000 may be found in the Amazon basin. In 2001, it was estimated that at least 10,000 Amazonians participated in the fishery, including 1,000 fisherfolk from the riverine communities of the mid-Río Negro, like Barcelos.

The extraction of the aquarium fish of the river provides 80% of the income for the residents of Barcelos, representing an area over a thousand square miles. At least 20 million live fishes are exported from the region, representing more than $100 million in worldwide retail trade value (Chao 2001). Research has shown that the extraction of the aquarium fish from the area is biologically sustainable and has no minimal negative impact on the land and waters of the region. In fact, because the wild-caught aquarium fish trade has minimal detrimental effect on the area, the industry of wild-caught aquarium fish can help to support local communities by offering a long-term, sustainable source of income that establishes environmental stewardship in the land. When there is an economic stake in the land there could be more personal investment in the maintenance and care of the land, as those that are generating an income from the area rely on the health of the land. 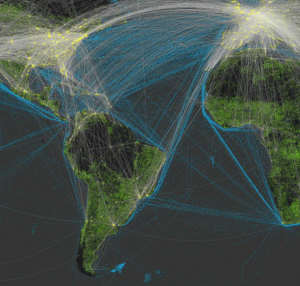 The wild harvesting of the cardinal tetra is the principal subsistence activity for the local riverine communities, representing at least 60% of the total income. Therefore, it is not difficult to realize that the aquarium fish trade ties the livelihood of local fisherfolk and the fate of Amazon ecosystem to those that seek the cardinal tetra, the consumers and tropical fish hobbyists worldwide. In order to preserve the diversity of the floodplain fishes and the well-being of the fisherfolk Project Piaba was initiated to explore these issues.

About the Rio Negro Fishery

”The fishing activity of home aquarium fish in a well established area, protects the natural environment, since other subsistence activities generally require the cutting of the forest…The fishermen know that home aquarium species maintaining the ecosystem are critical for fish continue to thrive, ensuring their livelihood. The massive scale of forest areas inundated in the Middle Rio Negro guarantee an almost inexhaustible supply of home aquarium fish which, in turn, ensure the sustainability of this activity is extremely beneficial to the environment compared with alternatives.”