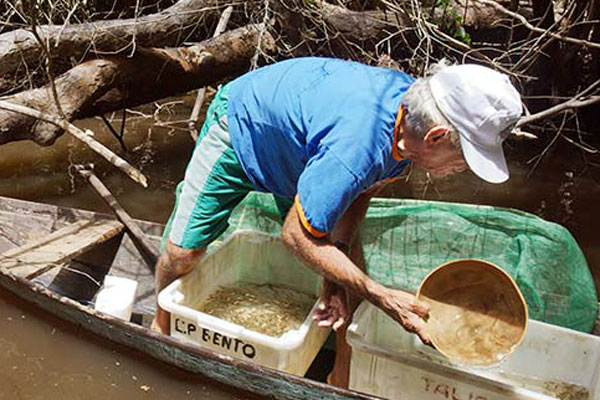 Jose Bentos and Francisco de Souza Colares are just two of the hundreds of fisherfolk (piabeiros) who work in the fishery.

This is Jose Bentos. He is from Zamula near the Rio Negro River in the Brazilian Amazon. Jose like many others has been fishing for the home aquarium fish trade for decades. His primary fish is the cardinal tetra. He has said that when he dies he would like to will the land he owns to Project Piaba as a fish reserve.

Here’s what another fisher says:

My name is Francisco de Souza Colares. I am a resident of the Aracuá community. I have been a piabeiro [ornamental fisherman] since I was eight. My dad was a piabeiro and I was born with the intuition to catch piaba [small Brazilian fish].
Everybody in my house fishes. There are five families here that make their living from fishing. Everybody here lives off fishing because we don’t have places to plant crops or raise animals.
My favorite place is the native forest. The tourists come and admire the forest. It is wonderful. And we preserve it, we don’t deforest.
Fishing is one of the better things we have to live from. If we couldn’t sell fish, how could we live here?

Here’s some information about one of the many communities in the fishery:

In the Brazilian state of Amazonas there is a tiny village called Daracua you can only get to by boat. On the banks of the Rio Negro, in houses on stilts to avoid the yearly flood waters, live the Piaberos, the fisher folk. As the floods begin to recede they take to their wooden canoes to catch discus fish and freshwater rays and many other types of fish for the aquarium fish trade around the world. By far the most important fish to the locals is a tiny species of local minnow, the Cardinal Tetra. This fish, barely 3cm (1.5 inches) long, is the backbone of the local economy. During the food rich flood season the tetras spawn, having hundreds of young. As the waters recede, many would simply perish. But the Piaberos catch them and supply thousands of them to the trade. Because the species is so prolific and has so many young, there is no risk of over-fishing. Harvesting the fish simply works in the life cycle of spawning fish during the flood, most dying off when the waters dry up. Over 60% of the locals rely on the aquarium fish trade for their primary income, and most of them catch Cardinal Tetras.
Because of the economic stability offered by fishing, and since the fish rely on food falling into the water from the trees of the flooded forest, the Piaberos are diligent in protecting the local ecosystem from those that would do it harm. There is no logging or mining allowed. They have preserved a pristine, beautiful rain forest, and go on protecting it year after year. This undisturbed forest provides a sanctuary to hundreds of species of birds and other animals. Protecting this fishery is of vital importance to the ecosystem.